MecSimCalc is a platform that simplifies the building and sharing of Python apps on the web. In a matter of minutes, you can transform any snippet of Python code to a computational app available instantly to the entire world wide web.

MecSimCalc gives you all the tools to build a modern online app without having to learn web programming languages, such as HTML, CSS, or Javascript.

In the Info step, the developer specifies the app's name, description, category, and tags. This information can later help users to search and find the app. The developer can also upload different images of the app to appear in MecSimCalc search results.

In the Inputs step, the developer specifies the types and format of the inputs required from the user to run the app. This step also allows the developer to preview and test how the inputs page responds to the user's input.

By clicking on the button in the bottom right, the developer can add "input groups" and different types of inputs. "Input groups" are used to visually group the inputs, and must be added first before dragging inputs into the groups.

The developer can then drag and drop any of the available input types such as numerical inputs, text inputs, file inputs, and others from the inputs menu and into the input groups. The different inputs within an input group can be arranged, resized, and moved using the mouse. 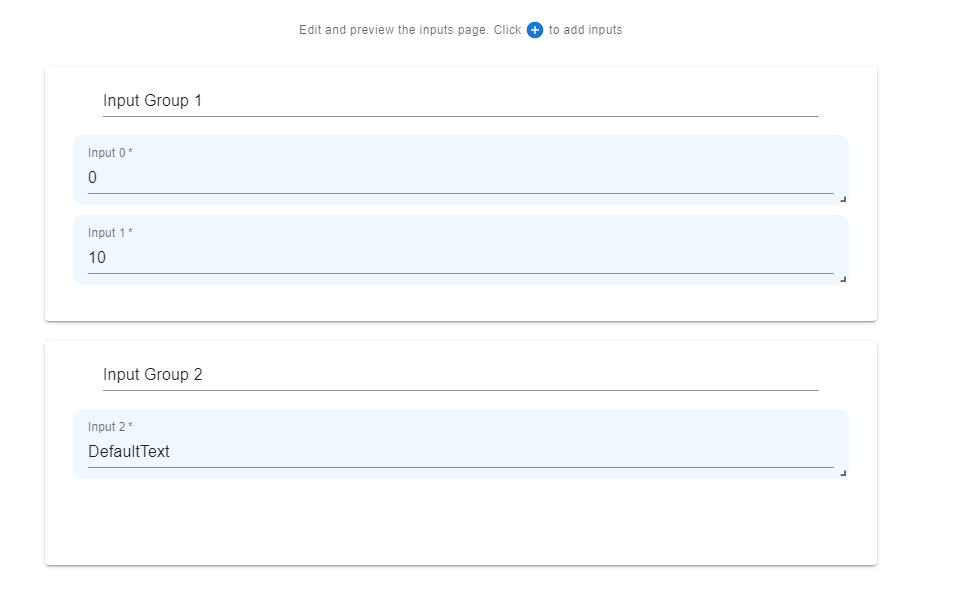 The developer can navigate to the preview section to view how the input page appears to the user:

When hovering over any of the added inputs, the edit button appears allowing the developer to edit the input's type, variable name (to be used at the later steps), default value, precision for numerical inputs, and other settings.

By clicking on <> Input Variables in the sidebar on the right, the developer can view and copy the names of the input variables available to the main function.

As an example, the following main function adds two numerical inputs, input_0 and input_1, and returns their sum, out1. It also returns the third text input input_2 as out2:

The dictionary keys, Sum and Message, are available for the developer to display anywhere on the output page (as explained in the next step).

In the output step, the developer displays the values returned from Step 3 using a familiar WYSIWYG (What You See Is What You Get) editor.

The dictionary key-value outputs from the code step can be embedded anywhere in the output page using the syntax {{outputs.key}}. As an example, the following output page displays the values of Sum and Message generated in the example in the code step.

The outputs available for the developer to embed in the output page can be viewed and copied by clicking on <> Output Variables.

The developer can also use conditional logic in designing the output page. By clicking on if or for in the toolbar, the syntax needed for these logical expressions is automatically generated.

As an example, the following output page displays the value of the Sum only if it is greater than 0.

The outputs editor leverages the simple styling from a WYSIWYG text editor with the power of Jinja and Nunjucks for conditional logic, and Katex for beautiful math equations.

In the docs step, the developer can provide a documentation page on how to use the app, or any references or other relevant information for the app.

In the final preview step, the developer can test the app before publishing it. Once published, the app's status changes from draft to published and the app becomes publicly available and shareable at a unique url.

Main Steps of an App​

The inputs, code, and outputs steps are the 3 layers that make an app. The developer designs an inputs page whose values are then available as input to the Code step main function. The outputs of the the main function can then be embedded into a nicely formatted output page.

The following diagram show how these steps work together to create the distance converter web-app. The inputs page requests the value of input_0 from the user, which is then used as a variable in the Python code (inputs['input_0']). The function main(inputs) then returns a dictionary of three keys: Feet, Inches, and Metre. These three keys are embedded into the output page using the syntax {{outputs.Feet}}, {{outputs.Inches}}, and {{outputs.Metre}}, respectively. The app is also also explained in details in Example 1 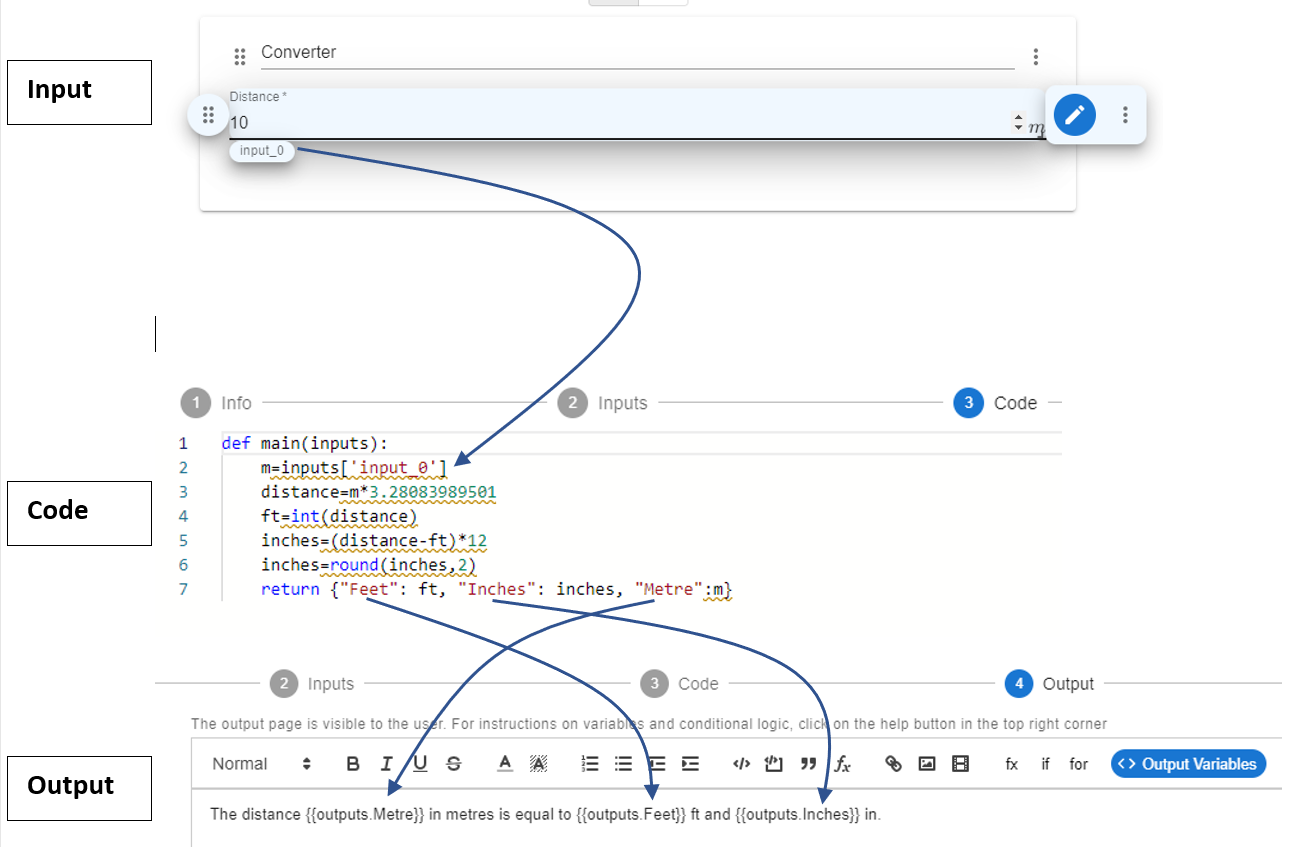